Yudhish had the opportunity to understand the overall dynamics of the Ethereum ecosystem, be a part of the Ethereum Foundation's Devcon Scholars Programme, meet special guests Vitalik Buterin, Aya Miyaguchi, and others, and bring back RM12,279 in cryptocurrency by participating in Devcon Bogotá The ability to explore and use the unique talents that each human being possesses is critical because it allows humans to explore outer space, conquer Mount Everest, and do a variety of extraordinary things such as new innovations and breakthrough technology.
Todo Es Posible (everything is possible)! That is one of the most important lessons learned by Asia Pacific University of Technology & Innovation (APU) student Yudhishthra Sugumaran, who attended the  Ethereum Developers Conference (Devcon) in Bogotá, Colombia, held from 11 to 14 October 2022.
Ethereum (ETH) is a decentralized blockchain platform with a native currency called Ether that is the second most popular cryptocurrency after Bitcoin, with 1 ETH worth RM7,457.43 on the market (at the time of writing). Ethereum’s ability to securely execute application code called smart contracts sets it apart from Bitcoin which merely acts as a store of value.
In many ways, this year's Devcon is unique. The organiser spent the last three years developing a new experience based on all previous Devcons and lessons learned while planning events during the pandemic.
Devcon is an intensive introduction for new Ethereum explorers, as well as a global family reunion for those already involved in the Ethereum ecosystem, with the goal of educating and empowering the community to build and use decentralised systems.
Devcon is for builders of all kinds, not just developers, engineers, designers, researchers, infrastructure operators, community organisers, social economists, artists, and others. From left, Yudhish and Eason, Malaysia's only two scholars at Devcon Bogotá, posed for a photo with Vitalik Buterin, Co-founder of Ethereum.
Yudhishthra was recommended by Ethereum Malaysia (ETHKL) to attend the conference as he was a community member there while being an intern at Etherscan, and as a result of ETHKL's recommendation, he was sponsored by the Ethereum Foundation, following which he landed a part-time role at Etherscan.
He had the opportunity to participate in the Ethereum Hackathon (ETHBogotá), as well as the Ethereum conference (Devcon) before returning to Malaysia on 19 October 2022.

He admits that during his 12 days in Colombia’s capital, he learned a lot about understanding the overall dynamics of the Ethereum ecosystem, such as the synergy that existed between ecosystem players focusing on different aspects of Ethereum (scalability, adoption, privacy and others).
He also learned how to solve common problems in developing countries, such as banking for the unbanked, censorship resistance, and fraud prevention.
“It all started with the Asia Pacific University Blockchain and Cryptocurrency Club (APUBCC), which provided me with this superb opportunity to explore blockchain space and also the tremendous support given by the club supervisors: Mr Suresh Naidu Sadasivan, Ms Meera Eeswaran and Ms Ng Hui Chen.
“Their encouragement has motivated me and others in the club to explore opportunities outside the university to gain as much experience as we could to improve the adoption rate of blockchain technology locally,” he confesses. 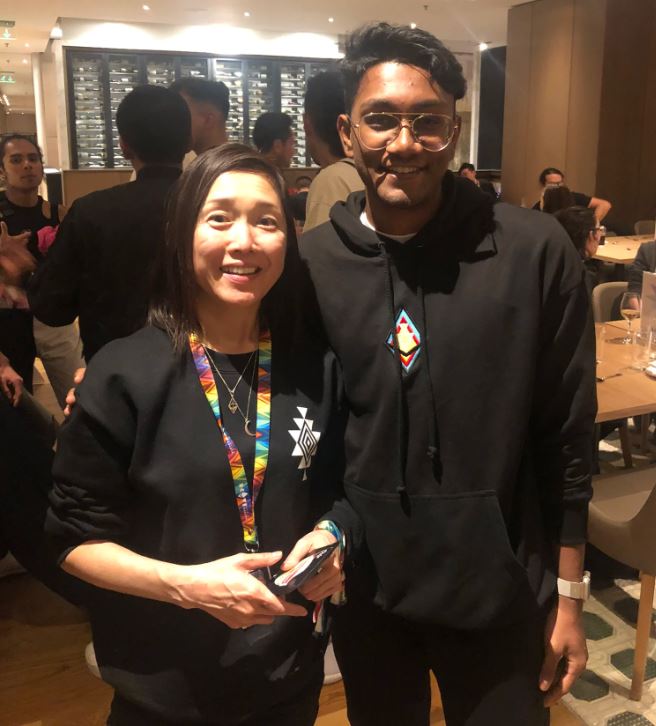 Yudhish also met with Aya Miyaguchi, the Executive Director of the Ethereum Foundation.
He progressed from being the vice president of APUBCC, a university club to being chosen as one of only 50 lucky participants from around the world to be a part of the Ethereum Foundation's Devcon Scholars Programme, which led to his participation in ETHBogotá and Devcon Bogotá.
Toward the end of Devcon, all attendees were greeted by a special guest, Vitalik Buterin, Co-founder of Ethereum, and Aya Miyaguchi, Executive Director of the Ethereum Foundation, who was instrumental in bringing the scholars programme to life, as well as other speakers such as Brewster Kahle, Danny Ryan, and Pia Mancini. From left Gary Sheng (USA), Yudhish (Malaysia), Alex Yao (Mexico), Kimverlyn Lim (Singapore), and Eason Chai (Malaysia) displayed their design GiveFire, which they completed in 36 hours.
“I was fascinated by the philosophy of Vitalik Buterin and Aya Miyaguchi and learned from them how to apply the same philosophy in aligning my focus with the things I want to achieve in this space and remaining consistent and focused on that,” he said.
Yudhish also received eight sponsor prizes totalling USD$ 12,971 (RM61,393), which he split with four of his group members: Gary Sheng (USA), Alex Yao (Mexico), Kimverlyn Lim (Singapore), and Eason Chai (Malaysia), and received approximately USD$2,590 (RM12,279) each for their GiveFire design, which they completed in 36 hours.
Yudhish has completed his Diploma in Information and Communications Technology with a specialism in Software Engineering and will start his BSc (Hons) in Computer Science (Cyber Security) in November.
Yudhish’s mentors, Mr Suresh, Ms Meera, and Ms Ng, are excited and proud of him, demonstrating that the APU study module will produce students who are fully equipped with the necessary exposure, as well as the additional knowledge gained from involvement in clubs and societies such as APUBCC, will help them gain more knowledge.
“We wish Yudhish the best of luck and hope he grabs more opportunities in the future. He works hard to get what he wants, and he truly deserves it.” On their last day in Bogota, Yudhish also had the opportunity to visit Sumapaz Paramo's peak.