HomeNewsThe Capables Made The Top 3 Position At ASEAN Level

The Capables Made The Top 3 Position At ASEAN Level

APU's national hackathon winners – "The Capables", proved how tough they were, by revamping their initial idea and ultimately won a joint third place at the ASEAN Finals of Tata Consultancy Services (TCS)’ Sustainathon 2021 in Singapore. 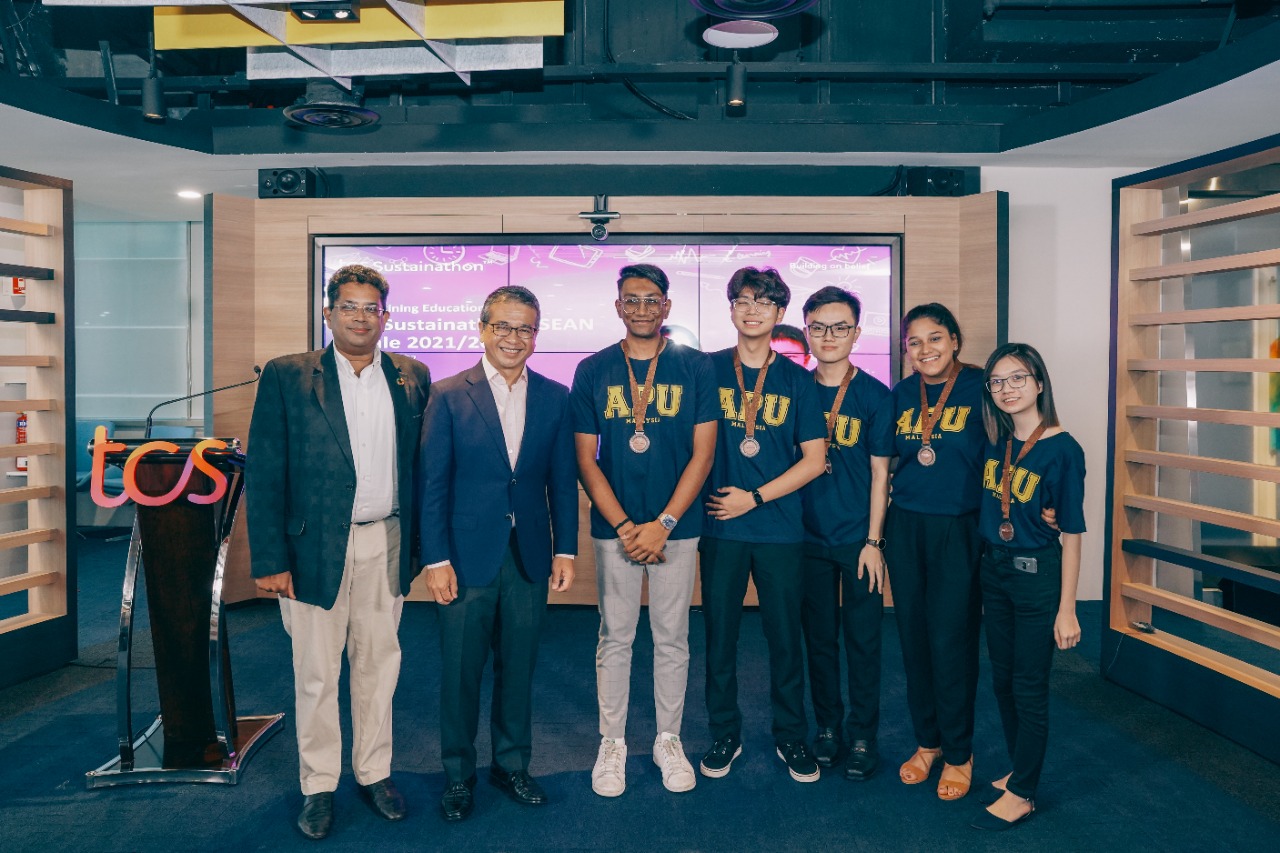 Mr. Edwin Tong, Singapore Minister for Culture, Community and Youth & Second Minister for Law (from second left), presenting medals to Yudhishthra S Sugumaran, Ethan Thong Ken Zen, Chua E Heng, Simerjit Kaur Sagoo, and Tan Wai Kaey. Witnessed by Mr Girish Ramachandran, TCS Asia Pacific President (left).
The team, led by Yudhishthra S Sugumaran, a Diploma in ICT Software Engineering student, consisted of his coursemates - Ethan Thong Ken Zen, Tan Wai Kaey, Chua E Heng; and also Simerjit Kaur Sagoo, a BSc (Hons) in Computer Science student, was initially the 1st runner-up at the TCS Sustainathon Malaysia 2021.
Due to the earlier pandemic, the national-level competition concluded last April. Subsequently, six teams, or the two top teams from Malaysia, the Philippines and Singapore respectively, participated in this ASEAN Finals, which was held on 20 August 2022 at TCS’ Asia Pacific headquarters in Singapore.
APU’s team presented their brainchild – EduRealm, a prototype in which they had spent numerous late-night meetings to beef up the solution of the integrated digital learning platform for students, teachers, and parents that aims to boost productivity and engagement levels.
“Every single team had improved upon their initial ideas before competing at the ASEAN level to have a better chance at winning. We too, spent sleepless nights coming up with the best visual looks for our slides and prototype, as well as a feasible business model and scaling plan that can give us a slight advantage,” said Simerjit.
According to her, EduRealm was modified based on what they did for the national level, to be more accessible to the underprivileged student communities by including empathetic features such as digital textbooks with text-to-speech support, a ‘blind mode’ that navigates through certain sections of the app with voice commands alone, and text transcript of lectures that can be used by students in areas with low internet connectivity rates.
“We tweaked our go-to-market strategy to ensure EduRealm can be used by educational institutions both in the public and private sectors.” Stepping up their game was also due to their competitors from Singapore and the Philippines having an excellent track record in hackathons.
Worth mentioning, that this was the first time “The Capables” went overseas for a hackathon, where they find it a worthwhile experience, given the fact that they were able to represent Malaysia. The rest of the teams were from Universiti Malaya, the National University of Singapore, Nanyang Technological University, Mindanao State University-Iligan, and the University of the Philippines-Cebu.
Reflecting on this experience, these members of the Integrated Sustainability & Urban Creativity Centre (ISUC) Student Chapter humbly said, “We were proud as we represented Malaysia, after all, we are just normal university students that believed something could be different about the current educational landscape.”
“When we weren’t sure what was the best way to make our solution more accessible, we overcame it by asking as many questions as we could to our mentor, the lecturer-advisor of ISUC, Ms Abbhirami Sivarajan,” they continued.
Upon winning a joint third place with Team Circus from Singapore, APU’s team were honoured to be awarded a medal each by Mr. Edwin Tong, Singapore Minister for Culture, Community and Youth & Second Minister for Law, looked on by Mr Girish Ramachandran, TCS Asia Pacific President.