Our students from the APU School of Computer Science, Reza Ahmad Nugroho and Wong Yi Ning successfully emerged as the Gold Winner for the 2nd Annual Virtual Innovation Competition 2021 (VIC21) Award under the category of Tertiary – Science & Technology. 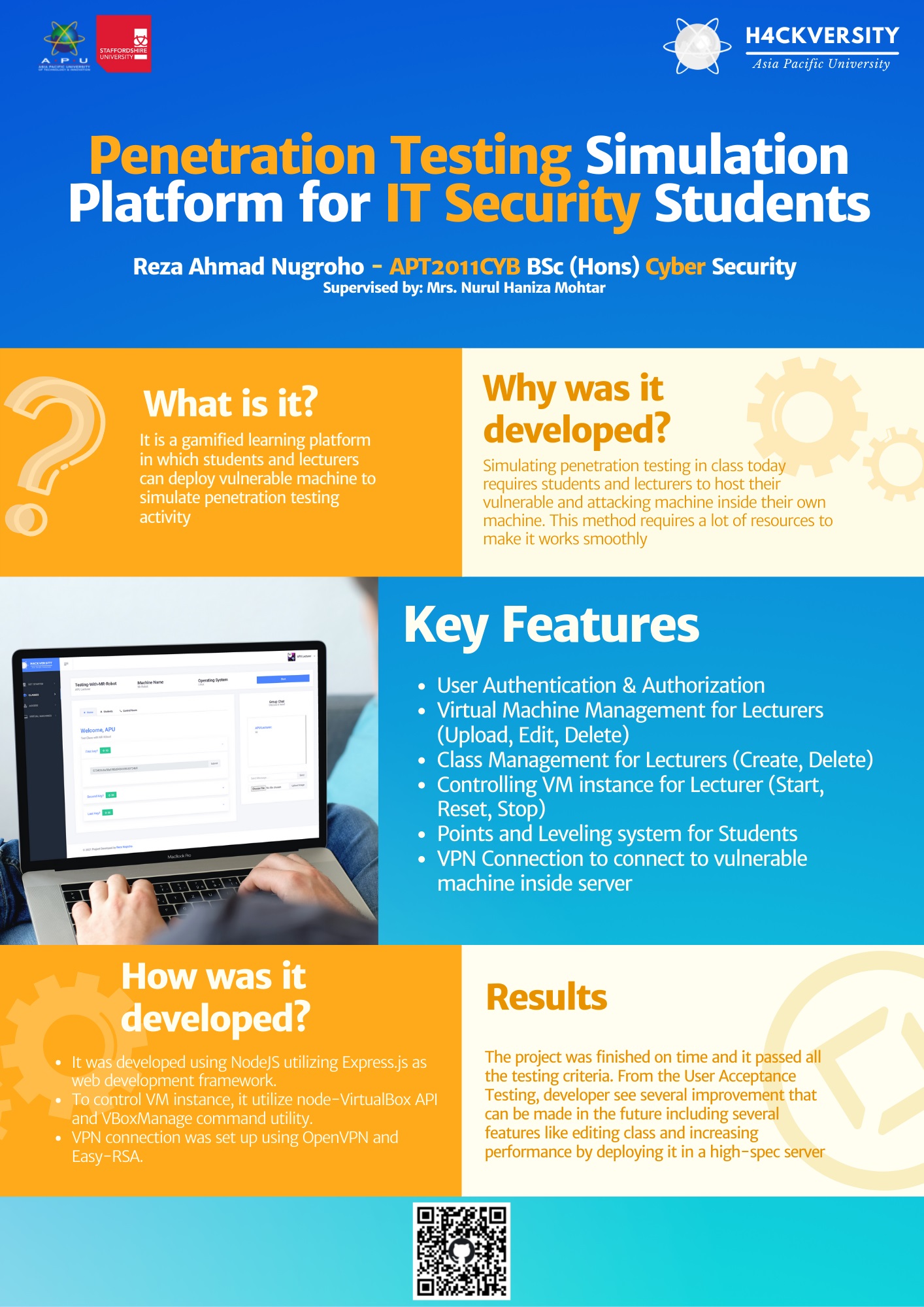 Due to the heavy load of operating numerous Virtual Machines (VMs) simultaneously and sharing multiple screens during hands-on ethical hacking classes, students and even lecturers experience some difficulties. This slows down the machine, as well as the overall learning process in the classroom.

Reza, a final-year student of the BSc (Hons) Computer Science (Cyber Security) programme, created ‘H4ckversity: Penetration Testing Simulation Platform for IT Security Students’ for his final year project, which aims to meet the needs of both students and lecturers through a penetration testing learning platform that incorporates elements of Capture the Flag (CTF) found in modern virtual hacking labs such as TryHackMe and HackTest.

The main difference between H4ckversity and other platforms is that it was developed so that lecturers can monitor, control, and supervise students inside classes where a vulnerable machine would be deployed and attacked, in addition to teaching student’s penetration testing.

With his vulnerable virtual machine functioning as a dummy target in penetration testing learning process, he succeeded to win the Gold Medal in the VIC21 competition, with the help of his supervisors, Ms Nurul Haniza Mohtar, Ms Nik Sakinah Nik Ab Aziz, Ms Salasiah Sulaiman, and Ms Maryam Var Naseri and his teammates in Ins3cure (CTF team).  In addition, this project also won the Best Video Special Award.

Reza’s focus on hacking and forensics techniques led him to build an online platform for learning penetration testing/hacking and the idea came up after a discussion with his friend about how problematic it is to learn hacking when we use outdated hardware.

“The development of the platform which took roughly four months; three months of coding and one month to test and tweak around the configuration to make it usable in a real scenario (classes in university) aims to reduce the hardware requirements for students or lecturers to simulate penetration testing/hacking activity,” he said. Yi Ning’s instant messaging system application applies encryption of the message content. Additional feature includes self-destruction option where the user can set the message to be automatically deleted after the receiver has successfully read the message.

Simultaneously, she discovered that it is easy to steal information (shoulder surfing) when the message (instant messaging) is in plaintext. Hence, encryption and a self-destruct timer are added as optional features to be applied by the user.

It took Yi Ning approximately three months to complete the first version of the application, plus a few more weeks to improve it so that it had enhanced features and functionalities.

“The application now works perfectly not only as a regular instant messaging system but one equipped with confidentiality and privacy protection,” she explained.

Updated versions of the CrypteLéMessage are already in the development pipeline, including potential collaborations towards commercialisation of this app.

All the awards had been announced virtually on 29th September 2021 and the judges of VIC21 were impressed by both Reza and Yi Ning project.